The Bahian Dress and the African Culture

The costume of the Bahianas, which is often called «baiano», reflects the influence of African culture in Brazil.

The typical costume of a bahiana is a set of traditional clothing and is the same as that used in the candomblé grounds.

In Brazil, there are costumes for all occasions. The ration costume is the simplest and costumes made with Richelieu embroidery can cost a lot.

The Baiana costume can acquire a special color when it comes to the Baianas of tourist events.

An example is the costume of the baiana of the Escola do Samba , which changes color and design according to the carnivtheme of the school each year, as does the maracatu of the northeast. 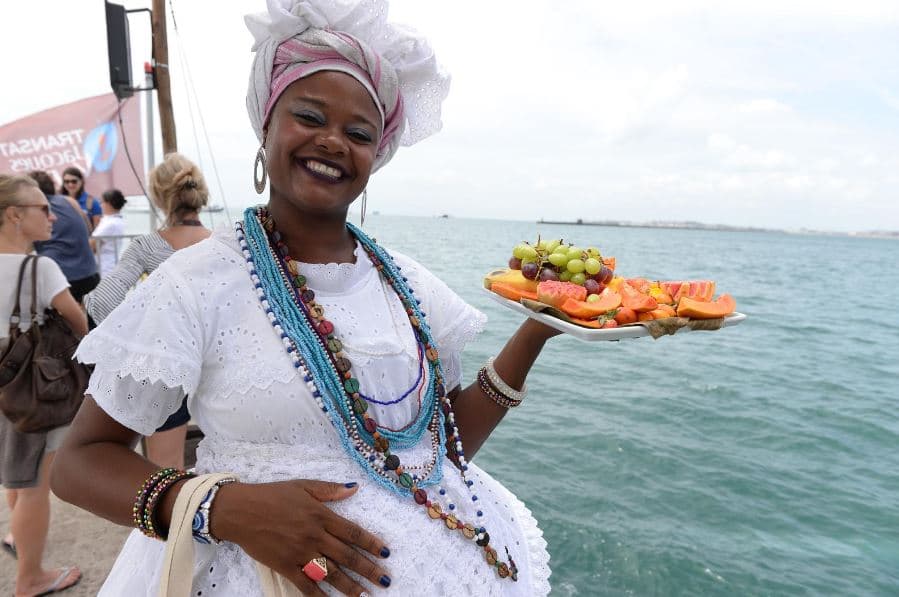 The turban of the bahianas and balangandãs indicates elements of the Islamic culture predominant in North Africa (Sudan).

The balangandãs’ plumes were part of the traditional clothing of the black maids of the 18th and 19th centuries.

The accessories of the baianas

Balangandã is an ornament of colored beads or amulet, in the form of a fig, fruit, medal, coin, key or tooth of an animal; a pendant with a silver ring, brooch, earrings or bracelet, worn by the baianas on festive days.

Figs, teeth and guides are used as amulets for protection, praise or to combat the evil eye.

The fig, in particular, is an amulet in the form of a closed hand, with the thumb between the index and big toe, used as a personal ornament, for the home or commercial establishment.

In Africa, the shore cloth was only an accessory to black women’s clothing, and had no religious connotation.

History and origin of the baianas costume

The typical Bahian costume is a mixture of Portuguese, African and Islamic cultures.

The rounded skirts and starched petticoats are inspired by the style of the Portuguese ladies. The necklaces and bracelets come from the African culture; the turbans, from the Islamized blacks. «The costumes of the Baianas are cultural celebrations».

In Brazil, from the 19th century, it began to be linked to Candomblé celebrations. 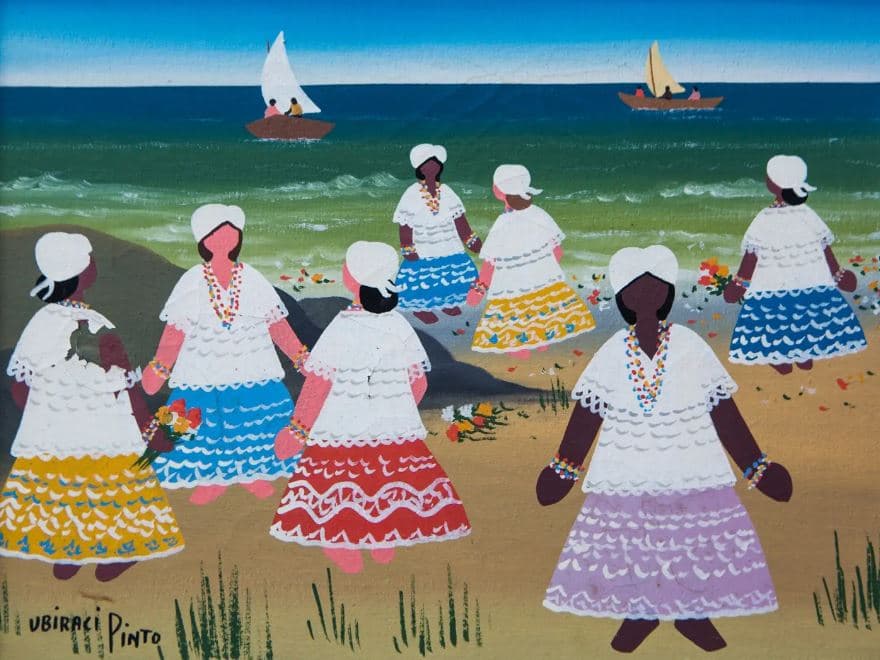 In Brazil, it was known as pano da costa because it came from the Ivory Coast (Africa) and also because it was worn on the back.

The first coastal cloths arrived on the bodies of slaves, who had no clothes and were sold wrapped in the cloth.

Later, the cloths were woven right here by the slaves or their descendants on handlooms and rustic looms that arrived in Brazil in the 18th century.

Woven on a hand loom, the coastal cloth is made up of strips of two meters each, with widths varying between 10 and 15 centimeters.

The strips are then sewn together one by one.

White is not the predominant color of the fabrics, which are usually striped or embroidered in relief and colored with cary drawings, according to the orixá of each nation.

The children of the saint wear the alaká wrapped around their backs.

During working hours, slave mothers carried their babies with their legs wrapped around their waists on their backs and tied by an alaká.

Why do baianas wear white clothes?

There is also the cult of the orixá Oxalá and historically, in religious syncretism, it dialogues with the figure of Allah.

The union of these two factors may explain the use of white clothes on Fridays by most Bahians», concluded the anthropologist.

What are axé costumes?

Today, practicality predominates, in rustic fabrics such as twill and denim and synthetics. The brand is more casual and brings prints created by the kids helped by Axé.

Who was the first man to wear Bahiano?

What is a baiana?

The Baiana de acarajé (or simply Baiana) is the name given to women who dedicate themselves to the traditional trade of selling acarajé and other delicacies of African and Afro-Bahian cuisine.

What are the typical dances of the State of Bahia?

Samba-reggae We cannot talk about the typical dances of Bahia without mentioning the samba-reggae. Originated in the 80’s by the master Neguinho do Samba, from the Olodum block, the rhythm is a mixture of samba and Jamaican reggae.

Samba-reggae has become a national and international success, becoming a trademark of the state of Bahia.

Why do macumbeiros wear white?

The traditional intention of wearing white is to ask for peace and give thanks for the blessings of the week.

In Candomblé the use of the color white, besides representing purity and protecting the Omo Òrìsá (children of the Orixás) from bad things, is also used as a sign of respect for the hierarchical importance of Òsàlá.

What type of clothing does the religious leader wear in the candomblé?

The tradition of wearing white clothes, for the candomblé, is a tribute to the African god Oxalá.

What is the Brazilian dance originating from the state of Bahia?

Entitled as Afro-Baian dance, the samba began in the country in the Bahia region, danced by slaves in the senzalas.

What is the typical dance of Mato Grosso?

Rasqueado Born from the interaction between blacks, Indians and whites, today the rasqueado is the folkloric rhythm symbol of Mato Grosso. Played in popular festivities, it has a lively rhythm.

Oxalá is the great orixá of creation and in his honor those initiated in candomblé dress in white every Friday, while observing other food and behavioral safeguards. However, the color is used on many other occasions, for various reasons.

The present-day «baianas», descendants of Africans (from the Yoruba, Nagô, mina, fula and haussá tribes) are the ones who take the greatest care in dressing up.

Nago women, whose presence is more noticeable in the candomblés, are short and fat. They wear bright and garish colors. They wear wide, patterned skirts.

The Bahian-Muslim (from the Sudan of Africa), tall and thin, wears a white and immaculate dress. Sometimes, on the shoulder a rustic «pano da Costa».

And, today, as the costume of the baianas and typical figure of Bahia, so sung by Dorival Caymmi, we can see the pregoeira baiana with its colorful trays of food and typical sweets, in the streets, hillsides and beaches of Salvador, or in the rites and religious festivals of Candomblé and Umbanda, as the Washing of the Bonfim.

In Salvador, on November 25, when the Day of the Bahiana is celebrated, a mass is held at the Church of N. Sra. do Rosário dos Pretos and cultural manifestations such as: Samba de Roda, Capoeira, Olodum and Afoxé, at the Memorial das Baianas.

The Bahiana is a figure that carries the links of the African ancestral heritage: orality, cuisine, beliefs, mysticism, dance, ginga and, above all, color.

You have to have ancestral blood to know what the Baiana has.